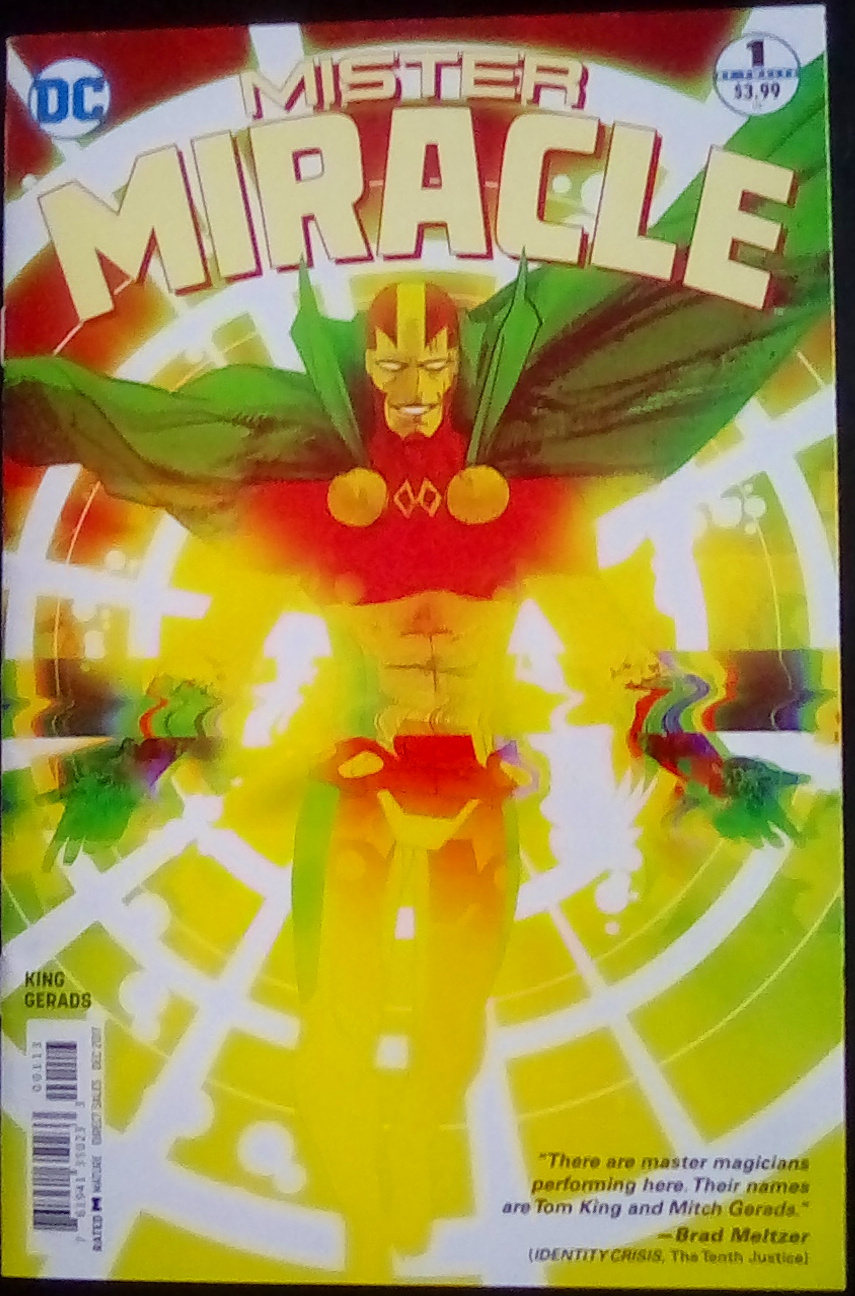 Okay, so I like rather obscure Jack Kirby heroes, but why am I making a blog post about him? Recently, (meaning last summer) DC Comics has started a new 12-issue miniseries starring Mister Miracle written by Tom King. This series is, in my opinion, one of the best comics being written right now.

I know you’ve likely never heard of Mr. Miracle. So I’m going to give you a quick rundown of who Mr. Miracle is, what his backstory is, and explain the miniseries so far so that when the next issue hits stand on March 14th you can pick up issue #7 and read this great story.

Most of the big name superheroes like Superman and Captain America got their start during the comics boom of the 1940’s fighting the Nazis. Other big name heroes like Green Arrow and Spider-man got big in the 1960’s because they were trying to tackle issues of the day like racism, and drugs.

Mr. Miracle was created by Jack Kirby in the early 1970’s. He escapes from traps and fights bad guys from a different planet. He’s just fun and action-packed. Although he did fight a Nazi! . . . in 1971.

Darkseid is one of the biggest baddest villains in all of DC comics. Darkseid is similar in some ways to the real-world emperor Nero. They both had over bearing mothers who tried to control their lives. Darkseid was forced to marry a woman that he hated, and she hated him too. At least they have something in common, that’s something you can build a marriage on! Darkseid locked her in a dungeon, so she trained their son to hate and murder his father (great parenting all around!)

A war between Apokolips and New Genesis was headed towards mutual destruction, Highfather wanted peace and Darkseid wanted time to rebuild his army. The two rulers decided to follow fairy tale logic and so they swapped sons. This way, each king would have his own son and heir on the other planet being held as a hostage to insure that neither one would risk war.

So Darkseid’s son, Orion, was given to the kind of loving Highfather. Highfather raised Orion as his own, because that’s what you do when your kind and loving. Now, this also means that Highfather’s son, Scott, was given to Darkseid. Darkseid sent Scott to an orphanage on Apokolips where he was kept in a pit. Thanks, Dad! 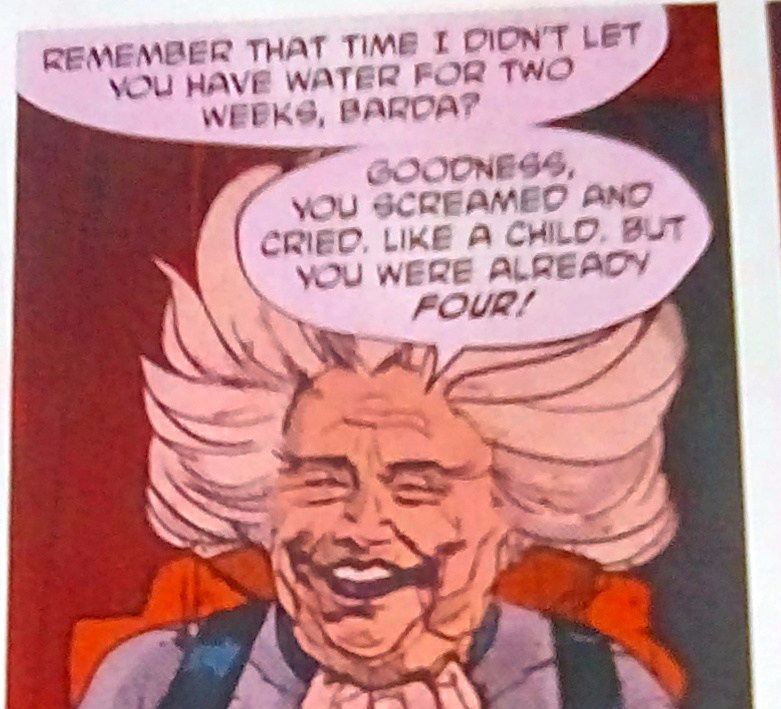 Scott got very good at escaping from the “headmistress” of the orphanage, an evil woman ironically named Granny Goodness. Granny is emotionally and physically abusive. The “Why did you make me hurt you?” kind of caregiver. Granny tormented Scott actually naming him “Scott Free” just to mock him for being a prisoner.

As good as Scott was at escaping, Scott was always re-captured and brought back to Granny. Scott was eventually able to escape from Apokolips through a portal called a “boom tube” (guess what sound it makes!) Scott’s escape was only possible because Big Barda, one of Darkseid’s elite female fighters, covered for him.

Landing on Earth, Scott knew he was truly free. He took the name Scott Free as his own. Scott met escape artist, Thaddeus Brown, AKA Mister Miracle and his assistant Oberon. When Scott helped them fight off some goons, Brown took in the young Scott. Shortly afterward, Brown was killed because this is a superhero origin story. Scott put on the Mister Miracle costume to both avenge the murder, and continue Mister Miracle’s show in honor of Brown.

Scott just wanted to live his life free from his past and entertain people as an escape artist. But Scott’s role as a hostage was too valuable for Darkseid to just let him go, so Scott was constantly being attacked by Darkseid’s goons.

Scott’s adventures eventually reunited him with Barda, and the two fell in love and got married. Making them, I believe, the first DC heroes to tie the knot! Barda and Scott truly love each other, and despite their past trauma, they are a very cute and cuddly couple.

If you are wondering: No, they don’t have any kids. . . yet. They’ve only been married for 40 years, they’re practically newlyweds! 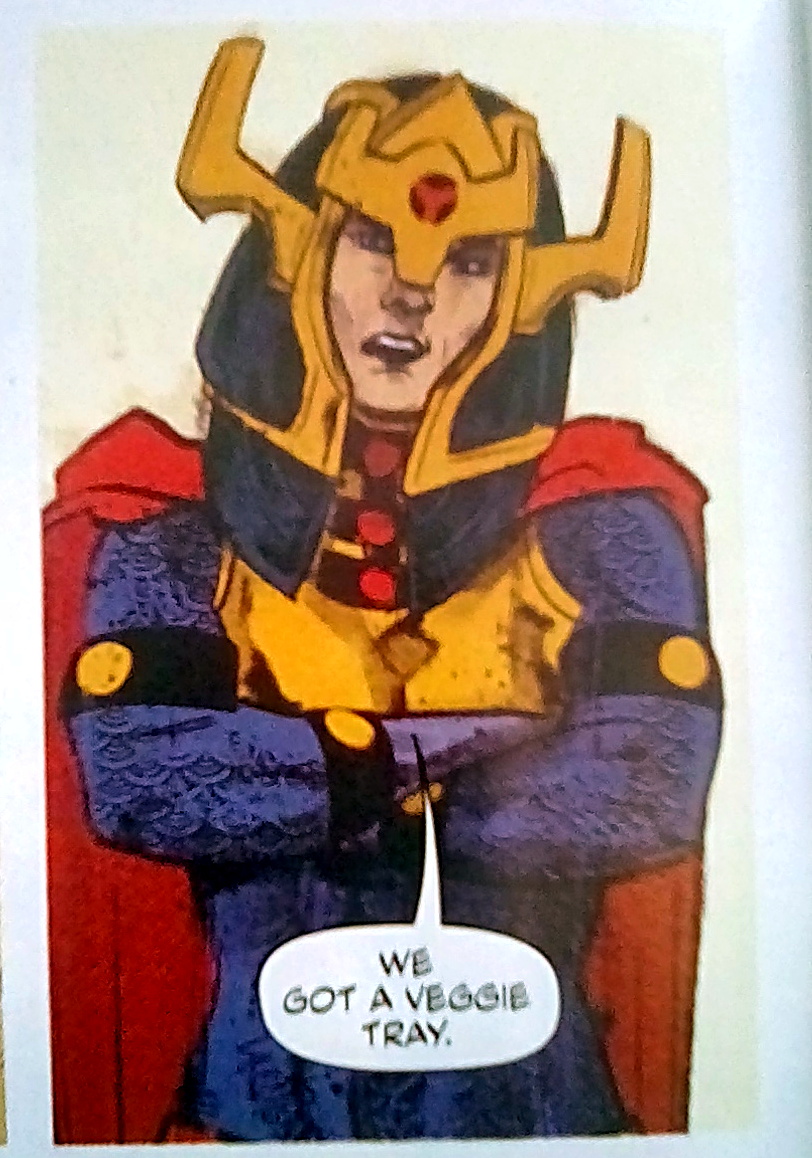 Barda is physically bigger and stronger than Scott. From birth, Barda was trained to be an elite fighter. Barda is a part-time member of the Justice League and she’s known as one of the team’s big bruisers like Superman.  Barda could actually give Superman a hard time in a fight even without Kryptonite.

We will not discuss how Barda first met Superman!

Barda was groomed for war by Granny Goodness. She was raised to believe that she would die fighting for Darkseid. So for her, the most rebellious, bad ass, expectation-defying thing she can be is. . . a housewife. Barda is a hero just like Scott, but mostly they both stay home, enjoying a quiet life they never thought they could have. . . until they get attacked by Granny Goodness again.

The Mini-Series so far (SPOILERS):

You can buy these comics online at comiXology, mycomicshop.com, or at your local comic book store.

Note: This is a bare-bones summary of the main plot for issues 1-6. Subplots, character arcs, themes, and other elements are being left out intentionally because it is my hope that after reading this you will want to read the comics yourself.

We open with Mister Miracle laying on his bathroom floor having just slit his wrists. He’s rushed to the hospital. After being released he explains that he did it to see if he could escape from death. It’s the one thing no one has ever escaped from before. 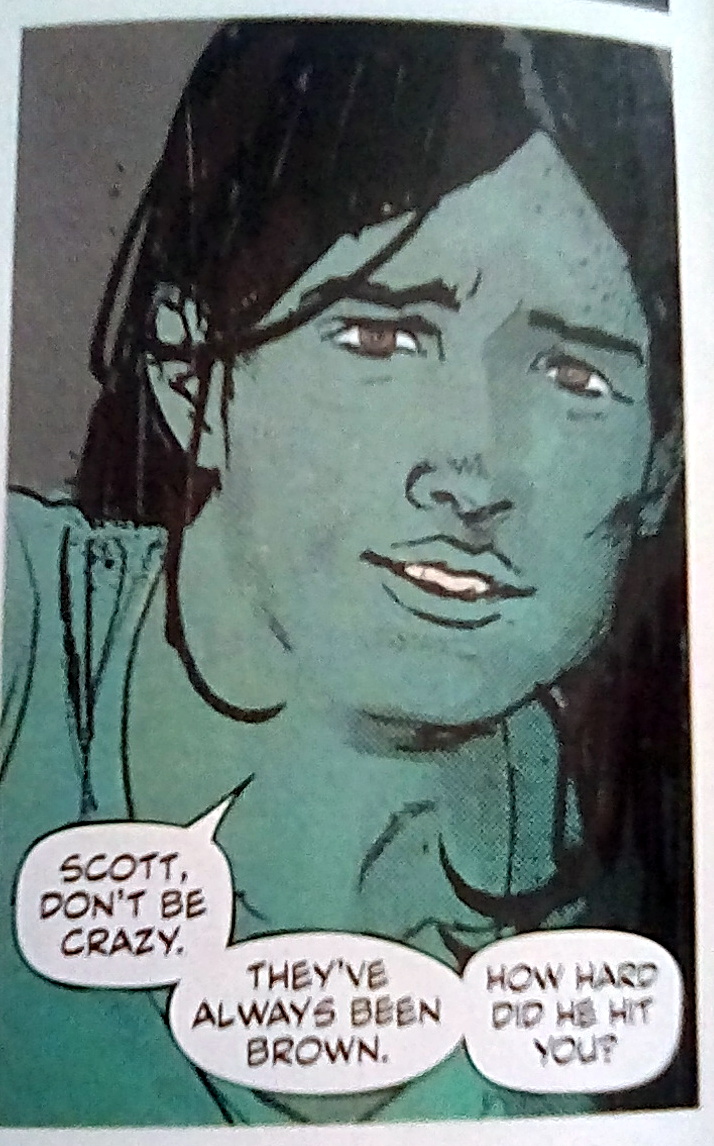 Resting at home, Orion shows up to punch Scott in his stupid face for trying to kill himself. (Did I forget to mention that Orion is the big brother?) As he leaves, Scott starts to notice things are off, he could have sworn Barda’s eyes were blue not brown.

Highfather shows up to check on his son and he tells Scott that Darkseid has something called the “anti-life equation.” It’s as bad as it sounds. So yeah, New Genesis is preparing for war. 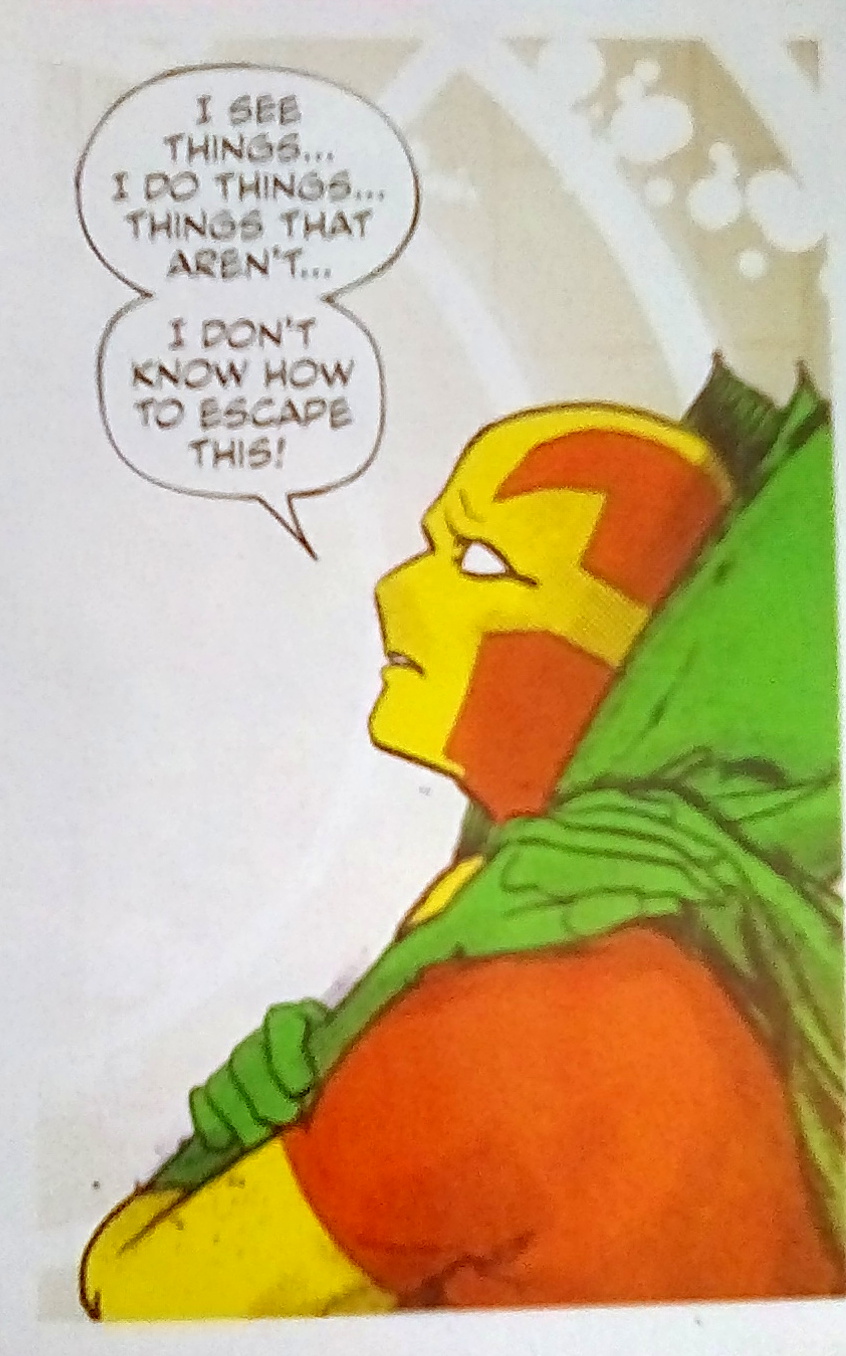 Scott can’t sleep. As he raids the fridge, Orion calls with bad news: Highfather has been murdered by an agent of Apokolips. It’s time for war. Scott and Barda suit up prepared to bring the war to Apokolips.

Scott and Barda jump into leadership roles in the war, but when they go to New Genesis they find that Orion has declared himself the new Highfather. . . Even though Scott is the true heir. The brothers can deal with the line of secession later, there’s a war to win. 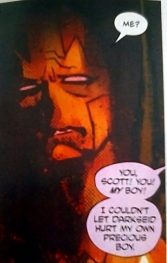 As the war rages on, Orion sends Scott and Barda on a mission to kill Granny Goodness. Granny tells Scott that Orion sent him on this mission hoping that Granny would kill him. Granny tells Scott that she has always loved him, and that she protected him from Darkseid. Scott doesn’t know what to believe. Barda is not conflicted. She attacks Granny before Granny can finish her warning to Scott.

Later, Scott tries to confront Orion about the way he’s been conducting the war. It doesn’t go well.  Orion puts Scott on trial for treason, he’s found guilty, and sentenced to death. Because he is part of the royal family, Scott is released under his own volition to put his affairs in order. He is to report for execution in three days.

Scott and Barda wrestle with what to do next, Scott’s attempted suicide is in the back of both their minds. Just before the time limit is up, Barda orders Scott to fight for his life, and he happily agrees. 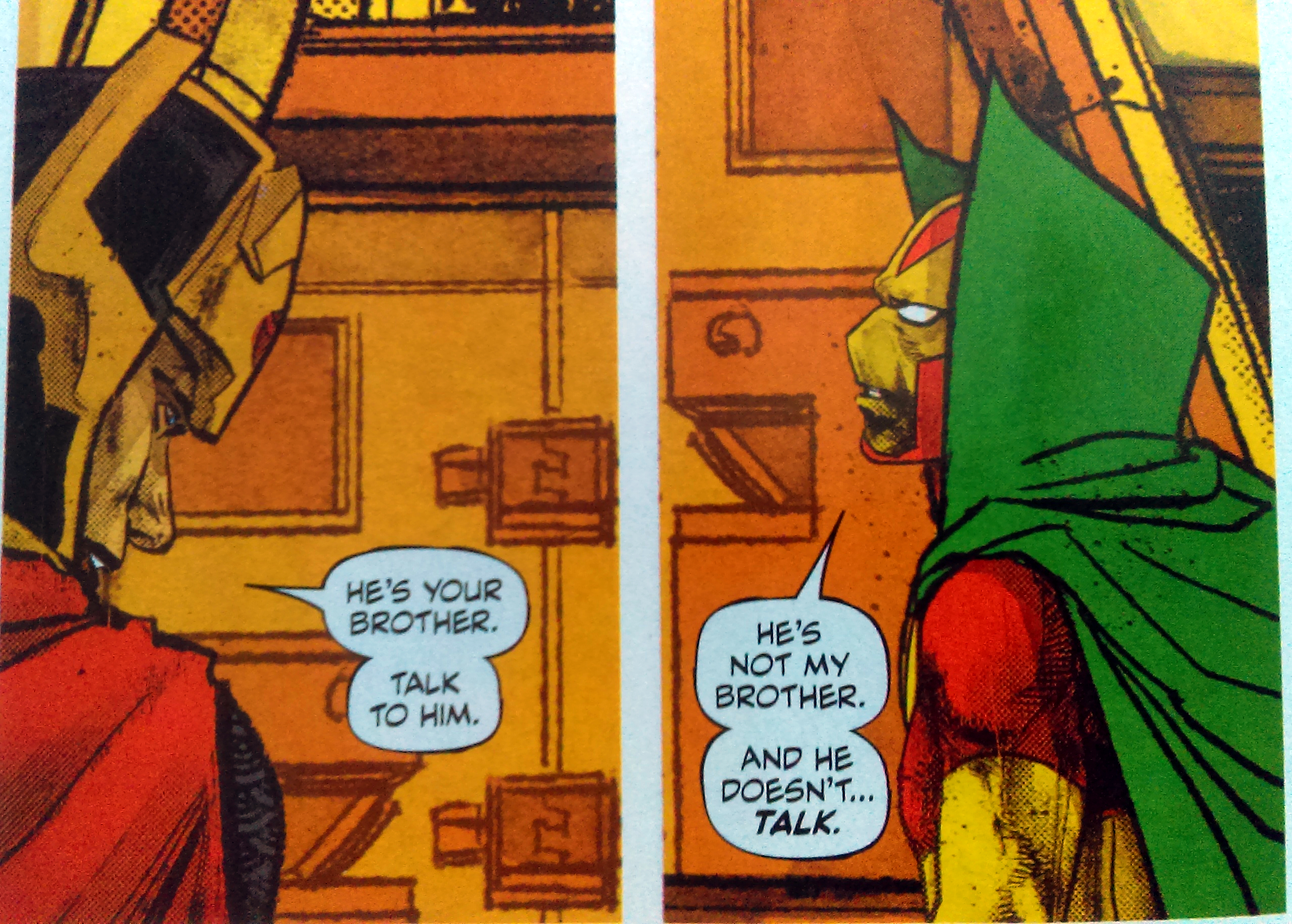 Scott and Barda break into the palace on New Genesis. Scott goes to the throne room to confront Orion man to man. Brother to brother. Scott finds Orion on the floor, presumably dead. Scott looks up and sees Darkseid’s omega beams glowing. Hearing a scream, Barda runs into the room to find Scott alone, sitting on the throne.