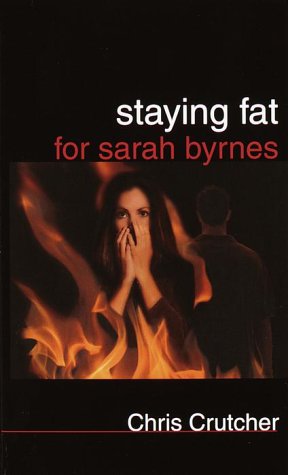 Eric is worried about Sarah Byrnes. They’ve been best friends for years. Growing up, Eric was “the fat kid” and Sarah was “the ugly kid”, her face was burned in a childhood accident. Together they were the outcasts in school.

When Eric joined the swim team, he started making more friends, and loosing some weight. He even has a girlfriend now! Just as Eric’s life is starting to get on track, Sarah seams to be spiraling out of control. Can Eric figure out what’s going on, or will Sarah Byrnes, burn out?

This is a story that deals with a lot of hard issues. Eric takes a American Thought class were they discuss issues like abortion, suicide, body image, and social justice, you know all thing things you actually CAN’T discuss in a modern American high school.

While religion is a theme, it’s more about religious people being hypocritical, religion itself is not really debated. Which was kind of annoying to see. This is televangelist Christianity, not real believers. I’m a Christian myself, and it hurt to see the way we were portrayed. As a young teen, this was the first time I was exposed to just how the world often sees Christians. I wanted to see a REAL Christian come in and lecture them on being “A pit of vipers” as Jesus would say. but sadly, this hypocrisy is never called out, Crutcher seams to treat it as Christianity as a whole.

I have mixed feelings about this book. The emotional elements are very real, but most of the bullies and abusers are just stock bad guys. Their motives for being nasty just aren’t there. It is the weakest part of the story and I really wish it were flushed out better.